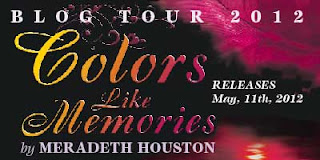 First off, thanks a million for hosting me today! I love connecting with other writers and readers :) And I do have a contest running for my blog tour—all commenter’s are entered into a drawing for two copies of my book, and one person will win a $25 giftcard to Amazon or Barnes & Nobel. There are more details on my home blog, if you want to check it out!

So, today I thought I’d talk a little about the themes in Colors Like Memories—my debut novel published by MuseItUp. Some part of me is going “Oh, great, back to high school English class.” Back then, I was a lot more into reading for an escape than reading for themes and symbolism and all the other stuff that cropped up on midterms and finals. When I’m writing, I’m still more invested in characters and plots and world-building than anything else :) But there are a few things in my book that are subjects that I have spent a lot of time thinking about that worked their way into the story and plot.

The most prominent of these is probably forgiveness. My main character, Julia, feels a huge amount of guilt over the death of her boyfriend. Marcy, the girl Julia’s supposed to be helping, feels terrible about the death of her mother. Both of these girls are trying to find a way to play the cards they have been dealt, and Marcy at least is ready to throw in her hand. Wow, doesn’t that sound uplifting? I swear it’s not as dark and depressing as it might seem! Anyhow, I think most people have faced events in their life that have brought them a great deal of sadness and loss, and finding a way to face this can be some of the hardest trials we ever face. They can be also incredibly character building (see what I did there? Character building? Gotta love the bad puns!). Learning how to forgive others, and especially how to forgive oneself, are definitely themes that are addressed in CLM. Of course, there’s some romance, a bookstore, and lots of flying tossed into the mix to make things interesting!

Inquiring minds want to know: do you find it easier to forgive others, or yourself?

A bit about Meradeth Houston:

Meradeth’s never been a big fan of talking about herself, but if you really want to know, here are some random tidbits about her:

She’s a Northern California girl. This generally means she talks too fast and use "like" a lot.

She has her doctorate in molecular anthropology. Translation: she sequences dead people's DNA and is a professional lab rat.

She’s been writing since she was 11 years old. It's her hobby, her passion, and she’s so happy to get to share her work!

Her other passion is teaching. There's nothing more fun than getting a classroom of college kids fired up about anthropology!

If she could have a super-power, it would totally be flying. Which is a little strange, because she’s terrified of heights. 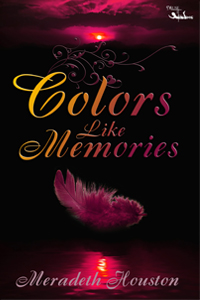 Julia has a secret: she killed the guy she loved. It was an accident—sort of. Julia is a Sary, the soul of a child who died before taking her first breath. Without this 'breath of life' she and others like her must help those on the verge of suicide. It's a job Julia used to enjoy, until the accident that claimed her boyfriend’s life—an accident she knows was her fault. If living with the guilt weren't enough, she's now assigned to help a girl dealing with the loss of her mother, something Julia's not exactly the best role model for. If she can't figure out a way to help her, Julia's going to lose her position in the Sary, something she swore to her boyfriend would never happen. Release date: May 11th 2012 from MuseItUp Publishing.
Labels: Colors Like Memories Meradeth Houston MuseItUp Publishing ya novel young adult fiction

Mayra Calvani said…
Great having you on my blog, Meradeth. Congrats on the release of your novel. It sounds compelling and I love the cover, by the way.
May 21, 2012 at 2:04 PM

mrs.which said…
Thank you so much for hosting me today, Mayra!

Kate Dolan said…
This sounds like an intriguing concept for a story. Forgiveness is a pretty tough concept in real life, too. I don't think most of us even think about forgiving ourselves - we either do it automatically or don't do it at all. My problem (okay, one of many) is that I'm never quite sure if I have really forgiven someone. If you haven't forgotten, have you truly forgiven? I could debate this for days!
May 21, 2012 at 6:30 PM

L. Diane Wolfe said…
It's always easier to forgive others than ourselves. Gary Chapman devoted a whole chapter to that in his book The Five Love Languages of Apology.

Forgiveness was the main theme in the fourth book of my series, too.

T. Forehand said…
Foregiveness is so hard because we never forget... great concept for the book. Can't wait to read it and maybe review for my blog. Thanks for letting us get to know you.
May 21, 2012 at 8:32 PM

Morgan Mandel said…
Very true. Forgetting is awfully difficult, and you have to try to do that if you want to forgive. And forgiving yourself of things is doubly difficult.

Margay Leah Justice said…
Hey, fellow Muser! Congratulations on your new book! Wishing you much luck with it.
May 22, 2012 at 12:00 AM

Cheryl said…
What a great post. I find it much easier to forgive others than myself. As a mom, I think I'm prone to be harder on myself than the rest of the family anyway.

Thanks for the chance to win.

Wishing you the best,

KatM21 said…
I love the colors and the title draws me in. Thank you for the bio, very interesting to learn about Authors.
redscold at yahoo dot com
May 22, 2012 at 2:48 PM

Karen Cioffi said…
Colors Like Memories sounds like a great read. The topic of forgiveness is universal. Best wishes.
May 22, 2012 at 3:14 PM

Faith Hope and Cherrytea said…
" events in their life that have brought them a great deal of sadness and loss, and finding a way to face this can be some of the hardest trials we ever face. They can be also incredibly character building"
definitely recognizing the forgiveness issue's validity ..
finding, for me, in diff situations i have diff responses- some it's easier for me to self forgive .. other times it's just the opposite - the other person gets the easier forgiveness. either way, the load rolls off and i breathe easier :)
faithhopecherrytea at*gmail.*com
thx for the thoughts, Meradeth !
May 22, 2012 at 11:43 PM