Bestselling author Alisa Valdes Rodriguez is best known for her women's fiction. Now she's also dabbling into the young adult market with this her new paranormal romance series, The Kindred. The first book, Temptation, hit the shelves on April 24th. I read the first three chapters free on Kindle and I have to say, the story is quite engrossing. I plan to download the complete book soon.

Let's support this talented Latina author! Be sure to check out her website and blog and read an excerpt of her newest novel, Temptation. Alisa Valdes is a New York Times and USA Today best­selling author of six commercial women's fiction novels, including the dirty girls social club. She has a Masters in journalism from Columbia and is a Pulitzer-nominated, award-winning former staff writer for the Boston Globe and Los Angeles Times. Alisa has written and sold pilot scripts to Nickelodeon, NBC, and Lifetime Television, as well as a teen crossover feature film based on The Kindred. 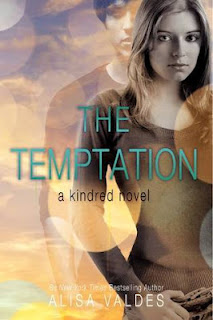 His touch was electric.
His eyes were magnetic.
His lips were a temptation. . . .
But was he real?
Shane is near death after crashing her car on a long stretch of empty highway in rural New Mexico when she is miraculously saved by a mysterious young man who walks out of nowhere. She feels an instant energy between them, both a warmth that fills her soul and a tingle that makes her shiver. But who, or what, is he? For the first time in her life, she believes in the term "soul mates"—Travis is her destiny, and she is his. But she soon discovers that Travis is dead and strict rules govern kindred spirits of different dimensions. Even a kiss could destroy both their souls. And while Travis is almost impossible to resist, temptation proves to be the kindest enemy they encounter.
In this part romance, part supernatural thriller, true love discovers it may not be able to surpass all—especially the power of pure evil.

And of course, don't forget to enter the contest below:

Unknown said…
Great post and so interesting. Glad I stopped by, and continued good luck with the blog hop!
May 9, 2012 at 3:22 PM

Donna McDine said…
Fascinating. The author has me hooked! Another book for my must read list.

Magic Carpet of 16x Books said…
I love a romance, Mayra, so this is one I will have to check out.

Thanks for sharing about this Latina author. Hopefully, I will have time to read her book this summer.

Nicole Weaver
Trilingual Children's Author
http://mysisterismybestfriend.blogspot.com
May 10, 2012 at 1:52 AM