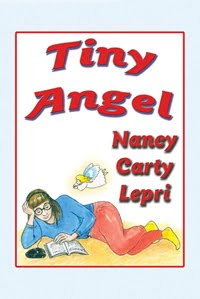 Things aren't looking too bright at the moment for 8-year old Macy. She's just moved into a new place, left her best friend behind, and in her new school there's a bully who makes her life miserable every chance he can get. But just when things can't seem to get any worse, she receives a visit from a special little friend: her very own guardian angel! This little angel is witty and has an attitude, and does her best to infuse Macy with strength and confidence. Finally an opportunity comes for Macy to prove herself at a bee spelling competition... Will she go for it and show everyone what she's made of, or succumb to her fear of success?

Tiny Angel is a well-written, delightful story that will entertain middle-grade girls. Macy, with all her doubts and insecurities, is a character young girls 8 and up will identify with. The story has a good message--there comes a time when we have to be bold and act in order to achieve our dreams--but it is not preachy; it's simply a good story about school, friends, being oneself, and achieving one's full potential. Highly recommended.


When her dad is transferred to a new town, ten-year-old Macy Carver leaves behind her best friend and everything she knows. Suddenly she’s the new girl…alone and bullied. An unexpected flash announces guardian angel Jody, who teaches her how to fit in and become a forever friend.

“Hey, chubbo quit hogging the sidewalk!” Kenny Thompson yanked the front of his bike off the ground, circled around eight-year-old Macy Carver, and stuck out his tongue.

Kenny cut the bike’s front wheel, covering her with dirty water. Laughing, he sped toward school.

“Creepazoid!” Macy brushed mud from her jeans, which made a worse mess. Mud had splattered her favorite top. Tears filled her eyes. Stupid North Carolina! Why did her dad have to move here? She hated being the new kid in class.

Thanks to Kenny, the kids either ignored her or were mean. To make things worse, she had to sit next to him.

Sighing, she trudged on, hoping that Kenny would have sprouted huge warts on his nose at school.

The first bell rang. Macy walked to her desk and tripped over Kenny’s outstretched foot.

“Hey four-eyes.” He laughed at her. “Are you a klutzo, too? Aw, poor Macy—dirty and klutzy.”

Macy grabbed the side of her desk to keep from falling. She glared at Kenny, ready to stick out her tongue, but decided he didn’t need anything else to tease her about.

Biting her lip, she sat at her desk. She wanted to go home—fat lot of good that would do her. She knew she wouldn’t feel better there. (continued)

castelane said…
Thanks for a great post. This sounds like a book my daughter would love.
November 21, 2009 at 1:57 PM

Unknown said…
WOW, great book. Kids need to read this book and sort through their feelings. I hope it ends up in the hands of millions of kids who need to build up their self esteem and achive their goals.
November 21, 2009 at 3:35 PM

Shari Lyle-Soffe said…
I'm adding this book to my Christmas list. My granddaughter just started at a new school and I think she would love this.

Donna McDine said…
Lovely review and thanks for the added touch of an excerpt.

Cheryl said…
I've read this book too and thought it was wonderful. Great review.