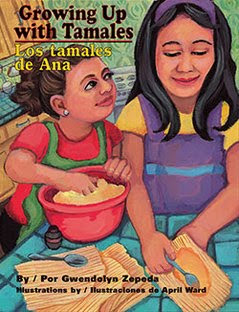 And so the years pass, and Ana turns eight, ten, twelve, fourteen, sixteen. But every year, big sister Lidia is always two years older. Ana envies her elder sibling and wishes she could do what Lidia does: put just the right amount of meat inside the tamales and roll them up; steam the tamales without scalding herself with the hot, hot steam; chop and cook the meat for the tamales without cutting or burning her hands.

When she turns eighteen, though, Ana knows she will keep making tamales and she will be able to do all of the steps herself in her very own factory. When Christmas comes around, Ana will deliver tamales to all of her customers around the world, in delivery trucks that say "Ana's Tamales." And maybe Ana will even let Lidia work for her.

Six-year-old Ana can't wait until she is eight, so she can be more grown-up like her big sister Lidia. Together, in this blithe bilingual tale, the sisters make tamales for Christmas, and with each passing year their responsibilities grow. As Ana dreams of life at ten (knowing songs on the radio), 12 (not being afraid), up to 18 (owning her own business), she measures her growth through the tasks awarded in their tamale-making tradition. Zepeda's charming story celebrates the satisfaction found in accomplishing a goal-no matter how big or small-and the trust new responsibility engenders. Ward's illustrations, while at times inconsistent, lend an honesty and warmth to the text. Her additive use of color and the immediacy of her brush-stroke effectively convey the love and longing of a little sister-and the patience and constancy of an older sibling. Young readers will delight in Zepeda's use of repetition and will giggle over the story's jocular ending. (Picture book. 4-8)

PreS-Gr 3- Ana, six, impatiently observes that while she gets to mix the cornmeal to make Christmas tamales, "My sister Lidia is eight, so she gets to spread the dough on the corn husk leaves." She goes on to explain all of the things she will be able to do, "But when I am eight, Lidia will be ten. So she will get to fill and roll the tamales. I wish I was ten." The bilingual text, which stands out boldly on warm golden-colored paper, progresses in two-year increments until Ana cheerfully resolves she will open her own tamale factory when she is 18, and her older sister can come work for her. The Spanish translation is accurate, but the title is significantly different. The Spanish title, "Ana's Tamales," seems less awkward than the English and foreshadows nicely the sweet ending and the name of Ana's delivery truck. This is an upbeat multicultural family story with brilliantly colored artwork.-Kirsten Cutler, Sonoma County Library, CA

Gr 2-4–Ana is six, which means that she is in first grade, learning to write, and beginning to read. But in terms of home, it means that she is old enough to mix the masa (dough) for the Christmas tamales. Her sister, Linda, is eight; so she is old enough to spread the masa on the corn husks. Ana dreams of being eight, so that she will be able to “...spread the dough just right—not too thick and not too thin.” But, of course, when she is eight, Linda will be ten, old enough to fill and roll the tamales. And so, this clever pattern book continues through the years, noting the things Ana will learn each year (when ten, for example, she will know the names of all 50 states and the words to songs on the radio) and the task that will become hers when making the Christmas tamales. By the time she has imagined herself at 18, Ana has given an entire set of directions for assembling and cooking tamales and decided that she wants to start her own business making tamales. This is an involving look at what it means to earn responsibilities—with just a little soupcon of sibling rivalry thrown in. A lovely complement to Gary Soto’s Too Many Tamales (Putnam, 1993), this story has some of the same family feel as Becky Chavarría-Chairéz’s Magda’s Tortillas/Las tortillas de Magda (Piñata, 2000). The Spanish translation is smooth and engaging, and the acrylic illustrations, though just a bit rough edged, make up in verve and vibrancy what they lack in execution (though children certainly won’t find them lacking). This is a cheerful look at a family tradition. Recommended for school and public libraries. -Ann Welton, Grant Center for the Expressive Arts, Tacoma, WA