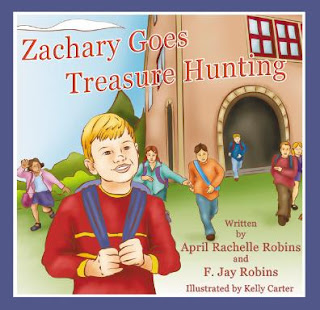 Now that school is out and the summer holidays are in, Zachary has some big plans to have fun. For one thing, he’s set on going on a treasure hunt.

At a thrift store, he gets the perfect ‘adventure’ hat; in the garage, he discovers several old toys inside an old trunk; on ‘Rummaging Day,’ he finds a pedal car painted with racing stripes; at a flea market with his parents, a mysterious woman gives him a ‘magical’ stone…

And in each case Zachary lets his imagination go and he imagines he’s transported to a different time and place. For instance, at the flea market, he pictures himself in Europe; at an auction, he imagines himself searching for a gold mine in the Old West; at his Grandparents’ farm, he sees himself transported to the Alaskan wilderness, and so on.

Zachary finds many imaginary treasures that summer, but nothing prepares him for the joy of the very real treasure he finds at the end. You’ll have to read the book to find out what that is!

Zachary Goes Treasure Hunting is a nice book for early readers to read on their own or for an adult to read to a young child. It brings up the idea of how powerful our imaginations can be and it also has a very cute and surprising ending that children will love. The illustrations are realistic and attractive but I would have loved to see a touch of playfulness and whimsicality to match the tone of the story and some of Zachary’s fantasies’ portrayed as well. All in all, this is an enjoyable children’s book that will entertain and enlighten young minds.
Labels: aboon books april robins reviews treasure hunting treasures Zachary Goes Treasure Hunting