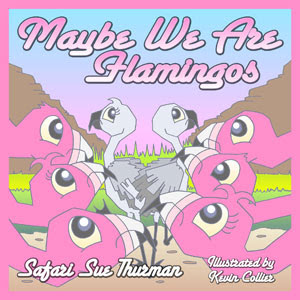 Safari Sue Thurman is a TV producer and author of Maybe We Are Flamingos, the first of a new series of children's picture books about animals. This delightful book, which offers a timely message for young minds, was richly illustrated by Kevin Scott Collier, a well-known artist with over 70 books to his credit. Currently Thurman is producing and directing a television pilot based on igniting children's imaginations with the best key there is--books. Watch the book trailer for Maybe We Are Flamingos here.

Thanks for being here today, Safari. Do you consider yourself to be a born writer?

Absolutely. A favorite movie of mine is Christmas Story. When the teacher tells the class they are going to write a theme, most of the students groan, but Ralphie sees it as the ultimate opportunity.

This scene is special to me since these words were music to my ears in third grade, where the magic of writing began. My pen became a magic wand in creating stories and the love has continued. The only major difference today is that the creations come to life through my keyboard.

From my earliest memory my imagination was extremely active. I was always making up stories to share with my mother or playmates. In fact, my house became the most popular place to play due to the creative games that flowed from my thoughts. One of my favorite activities was drawing with chalk on the concrete floor in our garage. It was a giant blueprint brought to life. Once I learned to write that colorful chalk was replaced with words and I’ve been hooked since childhood.

My current book, Maybe We Are Flamingos, was inspired by working at the Phoenix zoo, where I produced programs for children and their families. One day I noticed a bird that looked like a flamingo, only it was gray with some black feathers. When I asked a keeper what the bird was, she explained how flamingos are first white, then turn gray/black, then finally pink. They stay pink due to the foods they eat.

My imagination and sense of humor kicked in immediately. After explaining to a group why flamingos were pink, children were asked what they thought the birds would look like if they ate only blueberries. Amid lots of giggles, the idea for Flora and Fernando was born. Tell us about your children's books. The Safari Series of books include lots of animal stories and has started with my current release, Maybe We Are Flamingos. Others completed include, Monet The Smallest Ant, Sam The Tallest Giraffe, and the adventures of Dr. Zelda Zoolander Zocks, from the land down under. I also have a longer work in progress, Starshine, based on a character from live theatrical productions.

Starshine has appeared in a variety of venues and is from the planet Etheria, home to the largest library in the universe, where reading is magic. This galactic adventurer has many colorful friends, including a musical scientist named Logandy, her robot companion TC, and Palo, a silver weeper tree that teaches the forest of silver weepers their songs. My ultimate dream is to bring Starshine to life in a screenplay through Pixar.

In writing fiction, stream-of-consciousness writing works well for me. Once the glimmer of an idea gets my attention, it lurks in my mind for a time before I write anything down. I’m a very visual person so after looking at the idea as the production comes to life, I play with a variety of ways things could go. It unfolds as images on a giant movie screen and I observe how the characters might act with each other.

Along with promoting Maybe We Are Flamingos, I’m developing a script for a television pilot, Emerald City Imagineers. The planned series will promote the magic of reading with humor, animals, children, and highlight some of the best children’s books currently available. We plan to shoot this summer and books from Guardian Angel Publishing will be featured in the pilot.

I’m also going to have a rhyming contest in July, to celebrate the release of Maybe We Are Flamingos. It would be wonderful to announce the rules here, and there will be a prize for the winner.

What was your favorite book as a child?

There were several, but if I had to select one, it would be Mother Goose. It was like reading hundreds of mini stories. The illustrations were great and it was also fun to imagine what happened in Mother Goose Land outside the rhymes. I wanted to have rings on my fingers and bells on my toes while riding a white horse. I wondered if Little Jack Horner ever got sick of eating pie, and if four and twenty black birds might one day attack a neighbor while they put clothes on the line to dry. Trying to figure out what was in the curds and whey of little Miss Muffet drove me nuts until in my version it became cottage cheese and the spider made Miss M flea, so it would rhyme. Due to the influence of Mother G, I love to make up rhymes.

It’s been amazing to me when I’ve met many adults who were not read stories as children. This was a wonderful ritual with my mother when I was a child and more recently one my husband and I shared with our twin boys. Reading to a child is a special experience and time well spent. I loved story time at the zoo, and watching children's faces as they were pulled into the magic of a story is priceless. Watching an adult’s face when they are captured by a story is incredible. You can build warm memories with this special gift and nurture a lifetime love of reading. Please read to your child today and when they are old enough, have them read to you.

Remember the lyrics to our song:

Reading is magic, all you need is a really good book, it’s the key.

Thanks for the great interview, Sue!

Thank you, Mayra, for this interview opportunity. Your generosity is sincerely appreciated and the questions were great. Also a big thanks to Lynda at Guardian Angel Publishing, a wonderful and supportive publisher, and my friend and a wonderful author, Kim McDougall, for introducing us.

Anonymous said…
I used to write all the time as a kid too. As soon as I knew how to write, I was writing all the time. It's so natural for some people and I'm glad Safari is doing what she was meant to do.

Anonymous said…
Another innovation in the children's items comes in furniture presentation as bookcase for kids. Right now, single furniture serves different purposes. It is not that difficult to get something that will help you organize your child's things. There are a lot of wonderfully designed shelves that will easily adapt to a child's room. They come with various colors and themes as well. Your child is sure to find something that they will fall in love with a bookcases furniture. A cabinet is no longer a mere storage. It can be a child's height marker. There are even cabinets with different informative figures to aid the learning experiences of your child. There are even cabinets that look like a playhouse so that children can have fun even while organizing their things.These are the kinds of bookcases needed for our kids.
June 26, 2008 at 6:49 PM