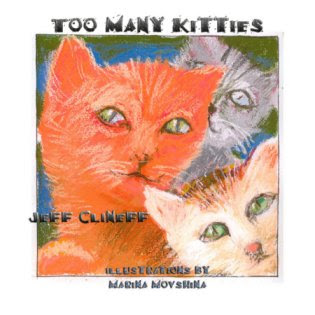 A native of West Chester Pennsylvania, children's author Jeff Clineff now resides in Douglassville with his wife, two children, in-laws, eight cats, and two dogs. Though he has been writing all his life for various people and activities, Too Many Kitties is his first published work. In this interview, Clineff talks about his book, his cats, the difficulty of writing picture books, and he offers some good advice to aspiring authors.

My recent and, at the moment, only release is called Too Many Kitties. It is about a day in the life of a boy and his three kitties, Gracie, Skipper and Maxx. It is based on three cats my wife and I have owned in our marriage. Of course, you don’t really “own” cats; they just agree to share their living space with you.
At 15, Gracie is our oldest. She is very much a lap cat and will spend the evenings sitting on my lap and watching TV.

Skipper was an orange tabby stray that we took care of when we lived in Virginia. He was a big, heavy cat. In the mornings, when he wanted to go outside, he would climb up onto the bed, sit on your chest and stare at your face, waiting until you woke up. This didn’t take long given his weight and our need to breath. The minute you opened your eyes he would HOWL until you got up to let him out.

Maxx was a stray who found us in Virginia was well. He was a light tan color with beautiful markings but the oddest thing about him was he had too many toes. Each foot had an extra toe, the front paw toes looking like thumbs. It was our firm belief that the minute we left the house, the other cats would convince Maxx to use his thumbs to work the cat food can opener or dial out for pizza.
Currently, I share my house with my wife, two kids, our six cats, my in-laws, their three cats and two dogs.

I have one picture book manuscript that is going through final edits before submitting it to my publisher. I have one picture book I hope to have ready by fall for submission. There are two tween science fiction chapter books rattling around in my head that I need to start putting down on paper, as well as a comedic fantasy novel and Christian mystery book based on Revelations.

Where are your books available?

Too Many Kitties is available from Guardian Angel Publishing, Borders, or Amazon.

Do you have a website/blog where readers may learn more about you and your works?

My Website is jeffclineff.com. I recently started blogging there, with each new update posted “when the spirit moves.”

Most definitely I write in a stream-of-consciousness. Many times I have no idea what is going to happen next. It is as big a surprise to me as it is to the characters. Often, a scene or line will pop into my head and I will have to write it down. If it works, I send the story in that direction and if not, I put it away to use somewhere else if I can.

Once I was at work and wrote a scene where a party of dwarfs had set up camp in a clearing. Their bellies full, they were settling down in the swirling snow for the night when they were set upon by a pack of wolves. Unfortunately, I wrote it on a terminal and there was no way to save it anywhere. It ended up being accidentally deleted before it could be written down, but those who saw it thought it was great.

The funny thing was I wasn’t trying to write a story about anything at the time. I was bored and the scene just came to me. When that happens I have to write it down or it will bounce around in my head all day.

We hear again and again that picture books are incredibly difficult to write. Why is that?

When writing a “regular” book the author has at his disposal a myriad of techniques and, more importantly, space to work with. Describing a scene in detail is possible when writing a regular book. This is not the case with picture books. With picture books, the author is limited in the words they use as well as their length. For instance, let’s look at the following:

Bill stumbled into his bedroom. Sloughing off his filthy clothing he collapsed into bed, pulling the threadbare sheet over his aching body. He closed his eyes, the exhaustion of the day slamming into him like a tidal wave, pummeling him into an unconscious state of fitful slumber. This is fine for a regular book, but it is clearly not appropriate for a picture book. The words themselves are beyond the comprehension of the target audience of a picture book and the imagery is also most likely beyond their ability to understand.

Billy climbed into his bed...
pulling the covers to his chin.
“You are filthy” momma said.
“My Billy-boy, where have you been?”
Billy drifted off to sleep...
A smile on his dirty face.
Pirates, robots, men from mars...
Billy had been to every place.

This is more on the level of the target audience, provides the reader with almost the same concepts as the first paragraph, but also provides the reader with an idea that Billy has been somewhere really cool! Billy is tired, dirty, and going to sleep. But there is more. Where has Billy been, did he beat the pirates, escape from the men from mars, were the robots friendly? Hopefully this sparks imagination. You need to be able to convey ideas without taking up too much space or using words outside the reader’s level of understanding.

How do you see the future of children’s picture books?

Picture books are perhaps the most important of all books. Picture books introduce children to the world of reading and imagination. At first they attract the attention of the child through the colorful pages and illustrations, but soon the child realizes there is a story, characters, actions and activities that take place as well. A well worn picture book means there is a child that can recite the story, at first from memory, then by recognizing the words on the page.

The future of picture books may see more interactivity such as what has been done with the Leapfrog pads. E-books may become more mainstream as newer generations are being raised in the Internet and computer age. Distribution may change from brick and mortar stores to buying, downloading and printing over the Internet.

No matter what, picture books will continue to be the tools used to build a foundation of good reading skills and active imaginations for generations to come.

Get used to rejection. Remember when you asked the hot girl/guy to the prom and they reached into your chest, pulled out your still beating heart and stomped on it while laughing maniacally? That feels better then the rejection letters from publishers. After all, that was just your heart, this is your BOOK! Just remind yourself that the person who rejected your book was a mouth-breathing troglodyte who wouldn’t know good literature if it bit them, but just in case, look over the manuscript again.

Don’t give up. This is your dream. Only you can make it happen.
Labels: animals cats ebooks guardian angel publishing jeff clineff kittens too many kitties

Anonymous said…
That is some good advice, about never giving up and also about learning to handle rejection. I can handle rejection pretty well, but I will also give up. Well, not necessarily give up, but put something on hold for a very, very long time.
July 3, 2008 at 6:12 AM