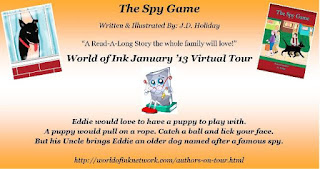 The World of Ink Network will be touring author and illustrator J.D. Holiday’s children’s read along picture book, The Spy Game throughout January 2013. It's my pleasure to host J.D. on my blog today! You can find more info about her full tour here.

About the Author: J.D. Holiday is the author and illustrator of four children's books. Picture books: JANOOSE THE GOOSE, THE SPY GAME, and Matt Shelley's Halloween Misadventure with Award-winning author, Christy Condoleo, and the chapter book for 6 to 8 year olds, THE GREAT SNOWBALL ESCAPADE. J.D. Holiday is a co-host on It's Story Time, Gather 'Round with Christy Condoleo on Blog Talk Radio's World Of Ink Network: http://www.blogtalkradio.com/worldofinknetwork

About the Book: Eddie would love to have a puppy to play with. A puppy would pull on a rope. Catch a ball and lick your face. But his Uncle brings Eddie an older dog named after a famous spy. What can you do with an old dog? It probably couldn't learn new tricks and the only thing this dog did was stare. It's what they find to do together that makes them the best of friends!

1. Thanks for the interview, J.D.! Could you tell us a little about yourself?
I am J.D. Holiday. I'm the author and illustrator of three children’s books: Picture books are; Janoose the Goose, The Spy Game, & a chapter book for six to eight year olds, The Great Snowball Escapade. I have had a chapbook of short stories called, Trespasses published in 1994 and has had short stories printed in literary magazines and numerous articles about writing and publishing published. I host on radio show for kids on The World of Ink Network at Blog Talk Radio, It’s Story Time, which is a children's reading show. I'm also a wife, mother of one daughter and grandmother of a seven year old boy named, Luke. We live in Pennsylvania with our dog Dora.

2.      Describe your workspace.
It's an old piece of furniture, a bench the top flips down and you have a table. The keyboard and monitor are in the center with a lamp behind them, the computer tower on the left of it and the scanner/printer on the right. I also use a laptop which I use sitting on the couch in my living room watching TV.

3.      Do you have a favorite quote?
My favorite quote is "THERE are some people who live in a dream world, and there are some who face reality; and then there are those who turn one into the other," by D. H. Everett. I find this quote more fascinating because of who Douglas H. Everett (1916 to2002) was. He was a practitioner and teacher of chemical thermodynamics which I even find hard to say. He wrote textbooks and published over 200 scientific papers about his work. His most important book, published in 1959, when I was eight years old,  was his Introduction to Chemical Thermodynamics. Everett's hobbies were building scientific models mostly to illustrate. He was also a musician and talented painter.

4.      What are you currently reading?
I love mysteries, and right now I am reading books by both Cleo Coyle/Alice Kimberly and Sandra Balzo: Holiday Buzz by Cleo Coyle and From The Grounds Up by Sandra Balzo.

5.      What is the best advice you've ever received?
I'd say it was, 'don't let how people treat you change the way you are and stop smiling.'

6.      If you could have coffee with anyone (living or dead, real or fictional), who would it be and why?
It was be my parents. I would love to ask them questions I don't know the answers to.  Even though, I was 19 when my father died and 20 when my mother died I felt like a child still in many ways. I would love to learn more about them as an adult myself. 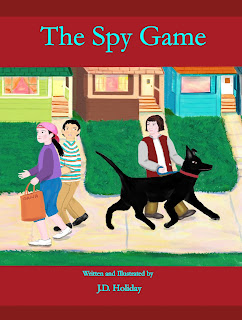 7.      What are your top three favorite books and why?
To Kill A Mocking Bird by Harper Lee, Madam, Will You Talk by Mary Stewart, and  Pride and Prejudice by Jane Austen.

8.      What was your favorite book as a child and why?
The Secret Garden. My second grade teacher read it to us at the end of every day.

9.      What would you say is your most interesting writing quirk?
I stop and write anytime a story or part of a story come to me. The problem is I have to write it down right away or I forget it. I end up jotting notes down on any piece of paper, I can find and stick all the notes into a binder that I have to go through one by one as I type my manuscripts. I have tried to be more organized but I can't change this.

10.  Do you write full-time or part-time?
I write part-time going between writing and painting. About 4 hours a day.

11.  If you could do anything in the world, what would it be and why?
I guess it would be to make a couple of my manuscripts into movies.

12.  What is the craziest thing you ever did? This could be as a writer or any other time in your life.
Well, people who know me will say that I have never done anything in my life that was crazy, and I would agree. I have always felt that doing what I think is the right thing at all times was how I wanted to live my life.

13. Did you feel like a celebrity when you held your first published book?
No. It's funny to me now, but I was just so glad I was able to accomplish it finally.It was a long time in coming.

14. If you could have a star like on Hollywood Blvd, who would you want to have your star by?
I don't know if Harper Lee has a star on the Hollywood Blvd., but it she did, I would like it to be by hers. Her one story, To Kill a Mocking Bird meant a great deal to me. It was always clear that there were great injustices in the world and in that story it was never more clear.

15. Is there anything in your life you wish you could do over and why?
Yes, there are a few things I would like to have changed along the way. The problem is, if I could do that, would those changes have altered the course I'm on for the better? They might not have and I feel that things are very good for me today.

16. Who has been your biggest support or inspiration?
Early on, there wasn't anyone who supported my writing. No one thought it would be useful or a way for me to make a living. Though now, everyone in my family and close friends support me. And my grandson, Luke is my biggest support. I also know that if my father had been alive when I started writing, he would have been my biggest supported at that time, because he was a writer as well.

17. Could you share about any current writing projects?
Yes, I am working on pictures to a sequel to my first children picture book, Janoose The Goose called The Fall Feather Fair co-written with my grandson when he was 6 years old. Luke is now  7.  I am also working on a collection of short stories I have written, for adults called Short Stories and Other Imaginings For The Reading Spot.

18. What would be the best way for readers to contact you?
Everyone can find me at my site: www.thebookgarden.net which in connected to my Blog Talk Radio show, It's Story Time on The World OF Ink Network, or people can just go to the show's site at: http://itsstorytimeforkids.blogspot.com
At Twitter: http://twitter.com/JDHoliday
Google+: https://plus.google.com/u/2/113703813948300028219/posts
Pinterest: http://pinterest.com/jdholiday/it-s-story-time/
Facebook: https://www.facebook.com/BooksByJDHoliday?ref=hl
Goodreads: http://www.goodreads.com/user/show/4320275-its-story-time-round-gather#
Linkedin: http://www.linkedin.com/in/jdholiday
Library Thing: http://www.librarything.com/profile/JDHoliday
YouTube: http://www.youtube.com/profile?user=janoosethegoose

19. Where can people find your book?
My books can be bought on Amazon and Barnes & Noble on line and ordered in bookstores.

20. Is there anything else you'd like to share?
Yes, thank you so much for having me here today.
Sincerely,
JD Holiday

Rosi said…
Wonderful interview. I'll be looking for his books. Thanks for posting this.
January 9, 2013 at 4:10 PM

Virginia S Grenier said…
Thanks for having JD Holiday on your blog and letting your readers get to know more about her and her books.
January 9, 2013 at 9:19 PM

Anonymous said…
Hi Mayra and J.D. Enjoyed the interview - thanks for sharing. I wish you every success with your books, JD.
January 11, 2013 at 3:58 AM

Anonymous said…
Hi Mayra and J.D. Enjoyed the interview - thanks for sharing. I wish you every success with your books, JD.
January 11, 2013 at 3:58 AM

Unknown said…
Oh! Magnificent post. Really this site is extremely obliging for all concerning this. I got a small number of important helps from here and extremely recommended it. Certainly I will be acquainted with my relatives and relevant competitors concerning this blog and will wait for more. Thanks a lot…….
April 18, 2013 at 10:58 PM