Interview with Beverly McClure, author of the historical YA novel, Caves, Cannons, and Crinolines

Beverly McClure's stories and articles have been published in leading children’s magazines. One article was reprinted in a Scott Foresman PreK-K Anthology. Her “Breakthrough” article appeared in the June 2007 issue of Writer Magazine. She has five novels for tweens and teens published with four more under contract, along with a picture book. Caves, Cannons, and Crinolines, a young adult historical fiction, is her latest release.

Thanks for being here today, Beverly! Please tells us about your latest young adult novel and what inspired you to write it.

Caves, Cannons, and Crinolines is historical fiction about the siege of Vicksburg, Mississippi, during the American Civil War. We visited Vicksburg one summer on our way to South Carolina. I fell in love with the city and its sad history. We toured the military park there and went through beautiful Victorian homes that stood during the Civil War. The old courthouse atop the hill where citizens watched the battles on the Mississippi River still stands and today is a museum. What a treasure of the past is there. I talked to the curator of the museum. A little lady told me about her grandparents who survived the siege. And I knew I had to tell their stories, not just about the war, but how it affected the women and children and their daily lives. 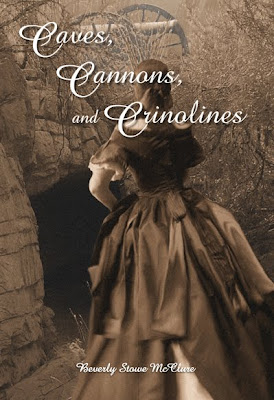 How long did it take you to write the book?

Did it require a lot of research?

Yes, it did, and I enjoyed every minute. I bought books, fiction and nonfiction, journals kept by the women of the city, copies of old newspapers and read about their lives, what they ate, how they dressed, all the little details of the times. Many universities have records on The Internet that were valuable in my research, such as letters from soldiers to their families.

Do you belong to a critique group? How has that helped you?

I do now, but when I was writing Caves, I didn’t so it was no help. Today, though, my crit groups (2) are so good to help me see details that I overlook and to point out where I contradict myself.

Mornings, Monday through Friday, are my best time to write, usually from 9 to 11 AM. Saturdays and Sundays are more catch up days. In the afternoon, I research, blog, answer emails. Evenings I write reviews, critique for my groups, and other stuff that didn’t get done earlier.

Yes, I do. Think of the thousands of books published each year. How else will readers learn about us, with so many to choose from? Yes to your second question too. I belong to just about every blog in the Universe and have to really guard my time or I’d get nothing else done except networking. Writing, as my top priority, comes first, while my brain is fresh. I try to write at least 2 hours a day. Then I can do the promoting thing.

What is your main advice for new authors?

Don’t give up. Believe in yourself. Read. Write the best story you can. Be patient. (That sometimes is the hardest one of all.)

Beverly Stowe McClure said…
Thank you for hosting me today, Mayra. I enjoyed answering your questions.

Everyone leaving a comment during the tour will be entered in a contest to win a copy of Caves, Cannons, and Crinolines.
August 10, 2010 at 4:51 AM