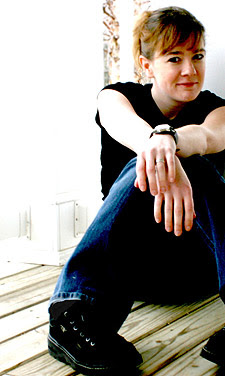 Please welcome my special guest, New York Times bestselling YA author Maggie Stiefvater! Maggie is the creator of the Wolves of Mercy Falls series. SHIVER was released last year and has garnered some excellent reviews. This month, however, Maggie is touring the blogosphere to promote the release of the second book in the series, LINGER.

In Shiver, Grace and Sam found each other. Now, in Linger, they must fight to be together. For Grace, this means defying her parents and keeping a very dangerous secret about her own well-being. For Sam, this means grappling with his werewolf past . . . and figuring out a way to survive into the future. Add into the mix a new wolf named Cole, whose own past has the potential to destroy the whole pack. And Isabel, who already lost her brother to the wolves . . . and is nonetheless drawn to Cole.

At turns harrowing and euphoric, Linger is a spellbinding love story that explores both sides of love—the light and the dark, the warm and the cold—in a way you will never forget.

It's a pleasure having you on my blog, Maggie! In the first book, SHIVER, the story is told from two points of view, that of Grace's and Sam's. What made you decide to use four points of view in LINGER?

I really wanted to make the story a bit of a wider focus, both to see Sam and Grace’s relationship from the outside but also to get a different perspective on life in Mercy Falls. Isabel’s point of view was a very late addition to the manuscript.

Isabel has an important role in this book. What compelled you to continue her story? Did you know in book I that she would eventually have such a major role?

I actually just put her in Shiver as the mean girl with Reasons for Being Mean, and the more I wrote her, the more interested I got in the nuances of her character. I was a bit of an ice princess in the first few years of college, and people tend to take that icy princess shell at face value. So frosty = bitch. When sometimes frosty = hiding, shy, or uncomfortable with making sincere relationships. Isabel lets me dig deep into what the girl behind the mascara.

In SHIVER Grace's parents are almost nonexistent, hardly ever getting involved in their daughter's life. In book II their attitude seems to change. Why? 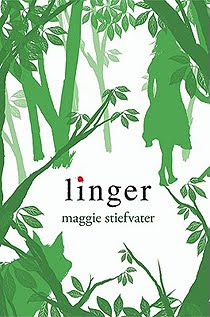 Ah, Grace’s parents. When I sold Shiver, I prepared myself for reviews that grumbled about the sexual content. What I didn’t expect was to get more reviews talking about the absentee parenting of Grace’s parents. The thing is, I’ve met a lot of parents like Grace’s -- more and more, actually, as I get older. They don’t see themselves as bad parents. They did their job; got their kids into high school without bad grades or drugs or wiccan rituals or an extreme love of World of Warcraft. They’re upper middle class white folks. Well-spoken, well-educated, two-income families that look quite ideal from the outside. But they aren’t families, they’re solar systems. Solitary planets who just happen to be in the same orbit due to the gravitational pull of the same last name. You might even know some of them. But I’ve talked to these teens who come from these families. Teens who drive themselves home, who have the house to themselves while their parents go on second and third honeymoons for a long weekend, who know more about their college plans than their parents. They exist. Trust me. Ask any high school teacher.

Anyway, in LINGER, Grace’s parents, floating as they were, get shocked out of their complacency when the natural order of things is disrupted. I try to be truthful in my characterizations even when it’s as annoying as all get out for me as a writer.

What was your inspiration for Cole and what made you decide to make him a rock star?

Cole! Cole was originally designed to make Sam look good. Sad, but true. I really, really have this thing for opposites in my fiction. Before a really bad scene, I’ll have a really pretty one. For every good relationship, a bad one. For every really nice boy, a really bad rocker one. *evil grin* Anyway, Cole was to be everything that Sam wasn’t. He also had to have a very good reason for choosing to go with Beck.

I just realized I still haven’t actually said “why rock star.” I can’t remember the exact moment I decided to make him a famous musician, actually. I remember that he had his roots in a character that I toyed with in a short story [http://community.livejournal.com/merry_fates/37340.html] I wrote on Merry Sisters of Fate, called Heart-Shaped Box. You can kind of see the scaffolding there for his personality and for the the relationship between Cole and his friend Victor.

How do you go about maintaining your characters' motivations believable throughout your stories? Is this a conscious decision or does it happen automatically as you write?

Wow, you have good questions (and hard ones). I think of my novels as character driven stories so therefore, to me, the characters’ motivations are always the most important thing. I can’t write the next scene until I ask myself: how will this affect them? What are the possible things they would do next?

Of course, I know the character arcs beforehand, so sometimes I have to come at it backwards. Like: I want this character to change in this way. What needs to happen to make that happen?

It is definitely not automatic.

Thank you for having me on your blog!

Thank you, Maggie, and best of luck with your tour!

Donna J. Shepherd said…
Thanks for allowing us to see the creative mind in action, Maggie. Mayra, you ask great questions.
July 22, 2010 at 3:05 PM

Darcía Helle said…
Great interview. Maggie, your series sounds like something every teen (and more than a few adults) will love. And that's a very cool trailer! Quite unique.
July 22, 2010 at 3:07 PM

Kai Strand, Author said…
It is always so much fun to hear about Maggie's motivations. Such a beautiful writer. Great interview ladies.
July 22, 2010 at 4:57 PM

Grier Cooper said…
The books look great, and it's always more compelling to pick them up after reading a personal interview.
July 22, 2010 at 6:04 PM

Dallas said…
Maggie, I love your books! I work frequently with teens and they always mention your books as some of their favorites. Thanks for this fantastic interview! :)

I love your books. My niece read the first one and she will read this one too. I will get a copy for her.

I have an adolescent blog for teen girls and I will review the book as soon as I can get my hands on it.

What a great interview Mayra! Thanks so much for sharing.

Ruth Donnelly said…
Nice interview! It was interesting to read about how Maggie developed her characters.
July 22, 2010 at 10:15 PM

Mayra Calvani said…
Thank you all for your comments, Ladies! I appreciate it and I'm glad you enjoyed the interview.
July 22, 2010 at 10:58 PM

Janet Ann Collins said…
It's too bad so many families are like the ones you mention, but teens will be able to identify with the characters in the book.
July 23, 2010 at 4:05 AM

Susan B James said…
Thank you Mayra and Maggie. I loved the glimpse into your creative process. I used the first line of Shiver in one of my first "Great First Line" Blogs for Pen and Ink
http://thepenandinkblog.blogspot.com/2009_11_01_archive.html
I am looking forward to Linger. I can hope there will be a third book.
Best
Susan J Berger
July 23, 2010 at 9:11 PM