My guest today is author Robyn Hood Black. Robyn has two great passions: children's books and wolves! I must say this last part is what drew me to her website like a magnet. Anyone who knows me well knows I share Robyn's passion for these magnificent, intelligent, mysterious and controversial animals. I hope you'll enjoy the interview. Robyn talks about how she got started as a children's author, her books, and, of course... wolves! 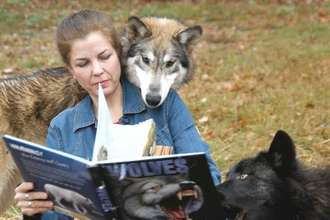 Thanks for being my guest today, Robyn! Tell us, when did you start writing for children?

I've been writing children's books since I was a child myself! Seriously, I was one of those kids always writing and illustrating stories, and this has been my dream for as long as I can remember. I was an English major at Furman University (where my oldest is starting this fall) and took the two children's lit courses offered at the time. I had a patchwork quilt of jobs after graduating and getting married, including working in a seminary communications office, writing for newspapers and magazines, working in an art gallery and selling my own art, scoring essays from standardized tests for elementary-aged students, working for a therapeutic horsemanship program, and teaching English part-time. I got involved with SCBWI around 1997, and I've volunteered in our Southern Breeze region ever since. With the publication of my first book, Sir Mike, a Rookie Reader from Scholastic/Children's Press (2005), I began walking this path full-time.

I understand you volunteer at the Chestatee Wildlife Preserve. How did that come about and how has it inspired your writing?

When I got the contract to write WOLVES for Intervisual's animal vault series, I wanted to observe wolves up close. The closest ones I found were at the Chestatee Wildlife Preserve in Dahlonega, Georgia, a short drive from my home. A few months later, I met two four-week-old wolf pups born there in 2008, Juno and Luna, and I immediately signed up as a volunteer. Working with them has been an amazing blessing and has enriched my life 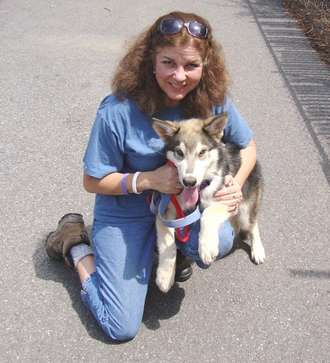 in many ways. A couple of creative projects inspired by the wolves have taken shape but haven't yet found a publishing home. I recently had the honor of naming a new male pup who came to us in July - Rio! I'm sure he'll inspire more fun endeavors as well.

Your book, WOLVES, instantly caught my attention when I initially checked your blog. Please tell us more about this project. I can tell it's close to your heart.

Through SCBWI, I met Peggy Shaw, then senior editor with Dalmatian Press/Intervisual Books. She needed to hire a couple of writers for titles in an animal series she was editing, and I lobbied for the job to write the wolf book! I wrote "loves wolves" on my business card before handing it to her at a conference. The books were all designed for mass market sales and the deadline was tight. Still, I wanted the research to be as meticulous as I could make it. My office became a den I hardly left for weeks! Online I found Ed Bangs, Gray Wolf Recovery Coordinator for the U.S. Fish and Wildlife Service out in Montana, and he was gracious enough to read the manuscript. Right before the book came out, I tracked down illustrator Colin Howard in England to tell him how great I thought the art was. All of the books in the series, including my critique group buddy Donna Bowman's BIG CATS, benefited from Matt Jeffirs' design work. To get to write the kind of book I would have loved as a kid, and hopefully contribute to wolf education, has been a thrill and an honor.

Your school visits and presentations about wolves must be fascinating to kids. What do you want children to take with them after they've listened to your talk?

I'm thrilled if they take away a couple of things. One, that they are creative and can express themselves effectively through their own words and art, and that writing - and researching - can be fun! Two, that the natural world is full of amazing gifts worth appreciating and learning about, such as wolves. Most kids are passionate about animals. If I can encourage their curiosity and nurture respect for an often misunderstood creature, that's a good day. School visits take a lot of energy, but I always feel energized by the enthusiasm of the kids.

You also write poetry and short fiction for magazines. Does it also revolve around wolves?

I've written several wolf poems, but the closest thing I have to one being published is one on tap to appear sometime in Ladybug - about a fox! A story scheduled to be published soon in Highlights is based on my mother's growing up in Arkansas, and there's a horse in a cameo role but no wolf. I'm always stirring a pot of writing ideas, and several involve wolves and other animals.

You love wolves because...

Ahh. Where to start? Wolves have been such a controversial animal in Western culture for hundreds of years. Perhaps that's because they share some characteristics of humans - they are very intelligent, they live in social structures with a dominance hierarchy, they hunt cooperatively, and they are fiercely loyal to their family groups. Folks tend to have very strong reactions to wolves, positive or negative. I have such respect for how they are mentally and physically suited to their life in the wild, and how they form such strong bonds with one another. All that said, I try to emphasize in presentations that they are not dogs - our pets evolved from wolf ancestors, but wolves are wild animals. Even captive ones, like the ones I've been privileged to work with, answer to their instincts first. They haven't been domesticated for thousands of years like dogs have.

What is the present situation with wolves right now and how can we do something about it?

Still controversial! Wolf researchers and advocates are working around the world, and that is heartening, but there are also plenty of folks who oppose the very presence of wolves on earth. While wolves thrive in some areas, their traditional range has been drastically reduced. Even among wolf supporters, wide ranges of thoughtful opinions exist about wolf management. I always point people to the International Wolf Center - http://www.wolf.org/ - for comprehensive and current information. I support the center as a member and encourage others to do so. The site has educational resources for teachers and kids (including "wolf cams" which offer a glimpse into daily life of the center's ambassador pack in Minnesota), as well as the latest headlines about anything wolf-related. Clicking the links to even a few newspaper articles each week reveals how contentious wolf issues continue to be in the Northern Rockies, where wolf-livestock conflicts are an issue. The preservation of wolves and other wildlife depends on cooperation among people with different, sometimes strong, opinions.

What's on the horizon for you?

Though I'm sad to report that Intervisual's animal vault series has just been discontinued, I plan to continue incorporating wolf education into presentations if schools are interested. As far as other projects, I'm hoping to find a publishing home for a couple of picture book manuscripts (one which won second place in our SCBWI Southern Breeze writing contest last fall), and I've just completed my first historical novel! I'll share details if/when it finds a home. I continue to write poetry and nonfiction, too. And I'll continue volunteering at the Chestatee Wildlife Preserve. There has been lots of excitement there this past week with the birth of a zedonk - Mama is a donkey mare and Daddy is a zebra stallion! The baby has garnered attention from all over the country, with several major media outlets featuring her. I have a couple of pictures and links on my website. Yes, I'm already working on a story.... As you say on your website, the writing life takes "a certain kind of madness." But I wouldn't trade it!

Thanks, Robyn! I wish you the best of luck with your books!
Labels: robyn hood black wolf books wolf children's books wolves

Scotti Cohn said…
Great interview! Robyn and I met through our mutual interest in wolves and children (a combination not normally recommended...).

Her book on wolves is stellar! I always show it to kids during my school visits, and they love it. (My picture book, One Wolf Howls, is for a younger age-group than Robyn's book.)

Karen Cioffi said…
Very interesting interview, Mayra. Robyn really does have hands on research. Her book sounds wonderful, and is on a topic I'm sure kids will be fascinated with.
August 3, 2010 at 2:48 PM

Mary Cunningham said…
Your passion for writing and wildlife is evident, Robyn and your generosity toward your fellow writers is second to none!

Thanks, Mayra and Robyn, for this fascinating interview!

Darcía Helle said…
Great interview, Mayra and Robyn. I love the photos! Wolves are such beautiful animals. It's sad that we're destroying their habitat, then blaming them for being in our way and acting like the wild animals that they are.
August 3, 2010 at 4:35 PM

Unknown said…
Thank you all for these lovely comments! It's wonderful to have kindred spirits out there, and I am honored to be on Mayra's great blog.
August 4, 2010 at 5:49 AM

Mayra Calvani said…
Thanks, everyone for visiting!