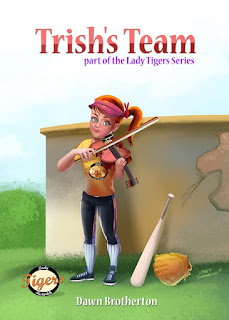 The debut release in Dawn Brotherton’s Lady Tigers series, Trish’s Team is a terrific new young adult tale featuring Trish Murphy.  A member of the Blue Birds, a recreational fastpitch softball team for 11 and 12 year old girls, Trish Murphy longs to be a member of the Lady Tigers, the elite travel team comprised of the best of the best players in the area.  When she is presented with the opportunity to try out for the team, Trish jumps at the chance. There’s just one small problem—it seems Trish’s parents don’t understand her love of the game.  Chances are they’ll be even less understanding and when they find out that team practice conflicts with Trish’s orchestra practice…

But being part of the Lady Tigers—and nurturing newfound friendships with the other team members—is Trish’s top priority.  When she tries to pull a fast one to get what she wants without considering the consequences, Trish puts everything in jeopardy. Trish’s decision could ultimately affect more than just the game: it could affect her friends.  Along the way, Trish discovers that being a part of the Lady Tigers is about much more than playing fastpitch softball:  it’s about being a part of a team.  But Trish may have to learn a painful lesson. After all, it really isn’t if you win or lose, but it’s how you play the game.