In the Spotlight: Mimi's Adventures in Baking, by Alyssa Gangeri 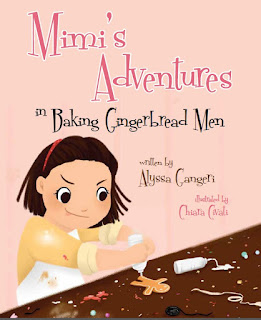 Embark on a baking adventure with Mimi where she will measure, mix, and bake her way to the perfect batch of gingerbread men. If Mimi can do it, so can you!

Chef Alyssa has been baking since she was a little girl in her grandmother's kitchen. Since graduating from the Culinary Institute of America she has worked for famous chefs and elite companies such as the Ritz Carlton, Tom Colicchio, Norman Van Aken and Gray Kunz. She currently is the Executive Chef at Riverwalk Bar and Grill on the Historic nook of New York City, Roosevelt Island. She also has a boutique custom cake company called AllyCakesNYC where she creates cakes to appease the imagination. Through her journey of baking she developed Mimi, her very own miniature version of herself.

As a child she loved baking and everything that came with it. As an adult and food lover she realized there was something missing when she frequented bookstores. A interactive children's cookbook. And we are not talking about a boring old cookbook for kids with lots and lots of recipes, and some pictures. Children these days have just as much interest in the kitchen as there parents do, but the ordinary cookbook is just not going to cut it. She created Mimi's Adventures in Baking  to give children and adults a way to get into the kitchen and allow the child to become the chef and the adult the assistant. With each book has one recipe and an interactive storyline the child can read, and at the end go into the kitchen and do what Mimi did!  And for the "non-baking" parent, these elite pastry chef recipes are tested and ready for even the most inexperienced baker! Impress other moms with Mimi's creations!

Mimi's Adventures in Baking will also teach children how to measure, mix and bake their way through the kitchen while also giving safety tips along the way. No more boring cookbooks! Now there is a fun, exciting and educational way to learn how to bake!

Rosi said…
I LOVE that cover! That would certainly make me want to read this book. Thanks for telling me about it.
December 22, 2015 at 6:20 PM

Unknown said…
Very nice website and articles. I will be realy very pleased to visit your website. Now I am found that we actually want. I check your website everyday and attempt to learn something from a blog. Thank you and looking forward to your new submit.