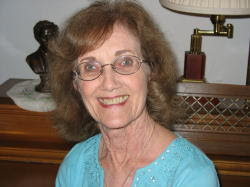 Beverly Mcclure talks about her latest young adult novel, Secrets I Have Kept. She also talks about inspiration, writer's block, and finding a publisher.

Hello, Beverly. Why don’t you start by telling us a bit about your book, and what inspired you to write such a story?

Secrets I Have Kept is a young adult mystery about Jennifer, a girl whose father, a molecular biologist, is kidnapped. Armed with nothing more than her own courage, a phone number on a candy wrapper, and her loyal Australian cattle dog, Chopin, she begins a desperate attempt to rescue him and to discover the reason for his abduction. In her search, she meets Casey, a runaway on a quest of his own: to find his father who deserted Casey and his mother when Casey was three. As they follow a trail of unusual clues, a chilling secret is revealed.

The idea for this story came to me one day when I was reading a magazine about the amazing drugs scientists are making with plants from the ocean. This story revolves around one such plant.

How would you describe your creative process while writing this novel? Was it stream-of-consciousness writing, or did you first write an outline? How long did it take you to write it? 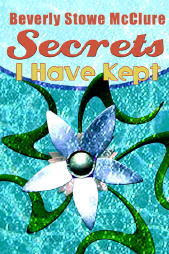 I started with the idea of a plant that could fulfill man’s wildest dreams or be man’s greatest nightmare. Then my characters introduced themselves to me, and I made character sheets to help me remember what they liked, hated, looked like, etc. They just led me along. Sometimes I had to back up and follow a different path, but I seldom outline. I prefer to see where the story takes me. From idea to finished story was around a year, maybe a little longer. I am a slow writer.

Have you ever suffered from writer’s block? What seems to work for unleashing your creativity?

Not really writer’s block. Sometimes I get stumped, but I play around with the scene, jot down possibilities, or go on to another scene with a reminder to go back and redo or finish the previous one. Long walks help to clear my head and an occasional solution will present itself. I think getting away from the story helps me focus on what it needs. It may take several days, but there is an answer.

How was your experience in looking for a publisher? What words of advice would you offer those novice authors who are in search of one?

I queried probably every large publisher in New York and those in between, with no success. Then I discovered small online publishers, and my book is now published. My advice would be to join messages boards such as Verla Kay’s Blue Boards, where writers, editors, and agents discuss the business of writing. Study the markets. Know what each house is looking for. Join a critique group. When your story is the best you can make it, send it out, again and again. If an editor makes comments, pay attention. Your story might improve with a few tweaks here and there. The markets are tough. Don’t get discouraged.

What type of book promotion seems to work the best for you?

Networking on the Internet has been my most productive promotion, especially the Muse Online Writers Conference where I was a presenter. I’ve had small successes at local bookstore signings, but that readership is limited, where the Internet reaches almost the whole world.

What is your favorite book of all time? Why?

My favorite book is Gone With the Wind. I love Scarlet who is not perfect and sometimes I want to shake her and say “Wake up, girl, Look at him,” meaning Rhett Butler of course. Why would she like wimpy Ashley with a hunk like Rhett after her? Also, the Civil War era is one of my favorite time periods.

Do you have a website/blog where readers may learn more about you and your work?

Do you have another novel on the works? Would you like to tell readers about your current or future projects.

Yes, I have two young adult novels scheduled for release in 2008. Rebel in Blue Jeans is a contemporary story about a girl whose mother runs away with the drummer in a rock band and what she does to try to bring her parents together again.

Caves, Cannons, and Crinolines, is a historical fiction story about one family’s struggle to survive a changing way of life during the Civil War.

Thanks for stopping by! It was a pleasure to have you here!

My pleasure, Mayra. I enjoyed chatting with you.